Governance Needs to Be Shaped to Be About People 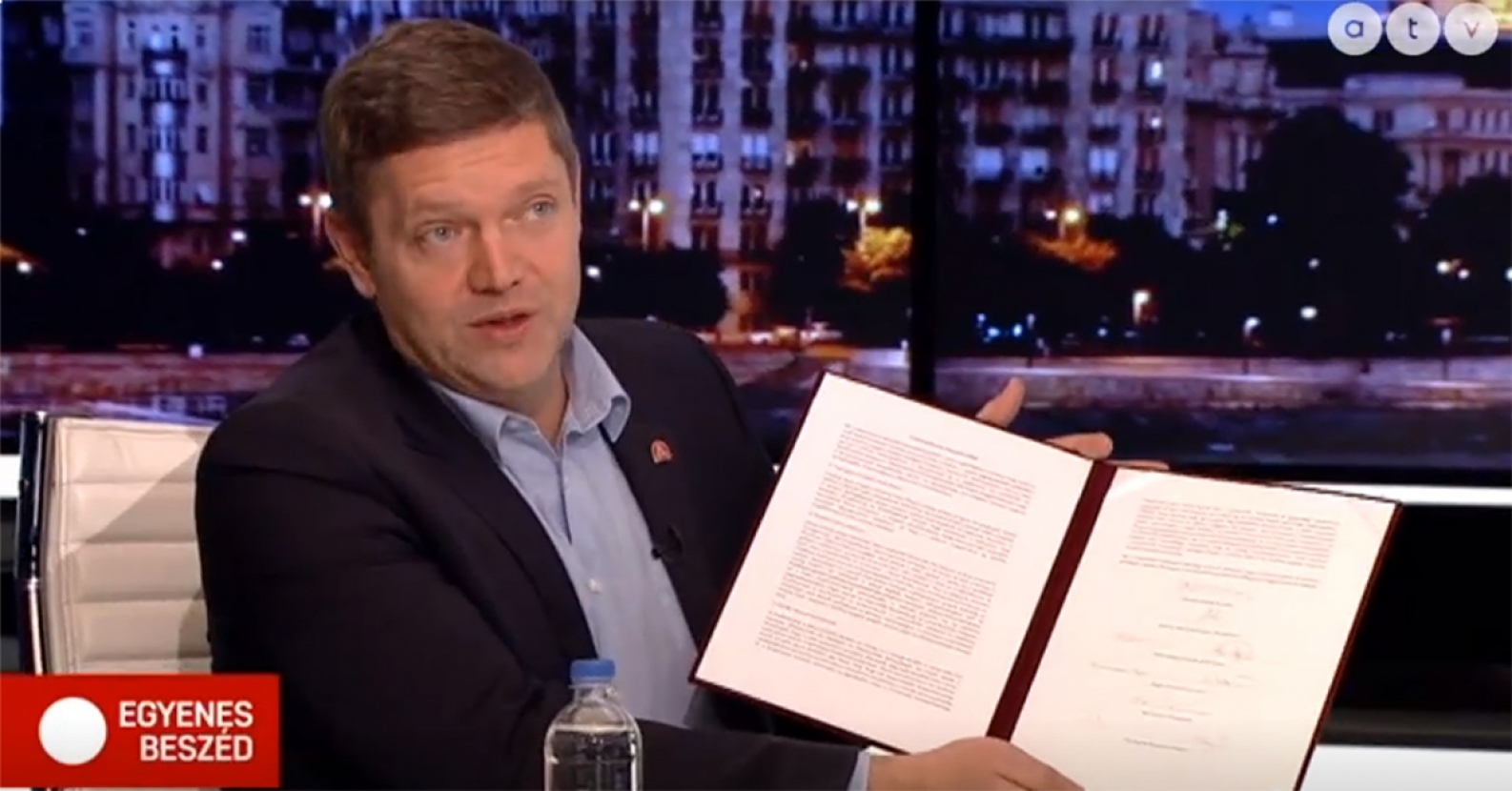 Hungary's next government must take measures with which Hungarian society can agree. It must serve the people, not a party and not a network of oligarchs, said co-president of MSZP Bertalan Tóth on ATV's Straightforward Talk.

Tóth was invited to the studio after the leaders of the democratic parties for the change of government, MSZP, DK, Jobbik, LMP, Momentum and Dialogue signed a declaration on Tuesday on their common core values, laying down the basic principles for their future governance. The co-president, in fact, handed over a copy of the signed document to the presenter.

Tóth confirmed that the adoption of this declaration of values ​​is a condition for the participation of all candidates and prime ministerial candidates in the pre-elections to be held this year.

He identified the primary task of those to change the government as strengthening the belief in the electorate that there is a chance for change and that the government changers can provide an alternative to the current situation. For this, there’s still “a lot of work to be done,” he admitted.

He summarised the common principles by stating “we want a democratic rule of law and to restore the rule of law in Hungary. We want to build a fair social and economic policy of solidarity and an environmentally conscious, environment protecting, green Hungary.”

Of the creation of their joint election and future government program he said: “there are many more intersections than anyone thinks” and this can also be felt in the program-making process.

He said they want a program that is not just the program of six parties, but the result of a broad social dialogue. Therefore, many NGOs and organisations have already been involved and many have joined the process.

He emphasized that the pre-elections would be open to other parties and NGOs, the candidates of civil organisations or even civil candidates. The six allied parties do not want to close this competition around themselves, but given the ability to govern, the winners will have to decide which of the future factions of the change-of-government parties that set the common list they will join.

He clarified that under the current conditions, if the system of rules remains, there is no intention to merge the six parties into one election party.

Responding to a question he said that although there were topic owners for certain areas in the creation of the program, they were far from “defining portfolios”. Experts from all parties will take part in the work, “it will be joint work (…), and a joint product,” he said.

As to how the pre-election results (I.e. who gets and how many seats in the 106 constituencies) could influence the role of parties in a possible future government, Tóth replied: the number of candidates does not affect the common basic values, but the joint program may be affected by the person of the prime ministerial candidate; “it could be considered innovation” how the person will have his or her ideas represented in the joint program.

Asked how the new government will be able to change the current two-thirds laws, such as the Fundamental Law, if it does not have two-thirds, the Co-President acknowledged that restoring the rule of law is indeed more difficult without a two-thirds mandate, but there are many measures that can alleviate the current situation.

He pointed out that the new government, even if unable to change two-thirds laws, “does not have to abuse” the “broad framework” of the current Fundamental Law. What matters is how it behaves in this framework.

He said the part of the document signed on Tuesday on democracy and the rule of law "guarantees that the next government will not use the means the current one does." He also said that the social and state goals set out in the document could also be achieved through the budget, which would be adopted by Parliament by a simple majority each year.

Commenting on what their plans were for the state and foundation officials who are to remain in their position for nine years, the co-president of MSZP said: “I am very, very confident that, as Fidesz now refers to the (…) electoral mandate, they will also accept when voters decide otherwise.” In a new political situation, in order to bring about social peace, current officials “need to adapt to this.”

"Because then what would we be fighting for?" he asked.

mszp.hu » News » Governance Needs to Be Shaped to Be About People