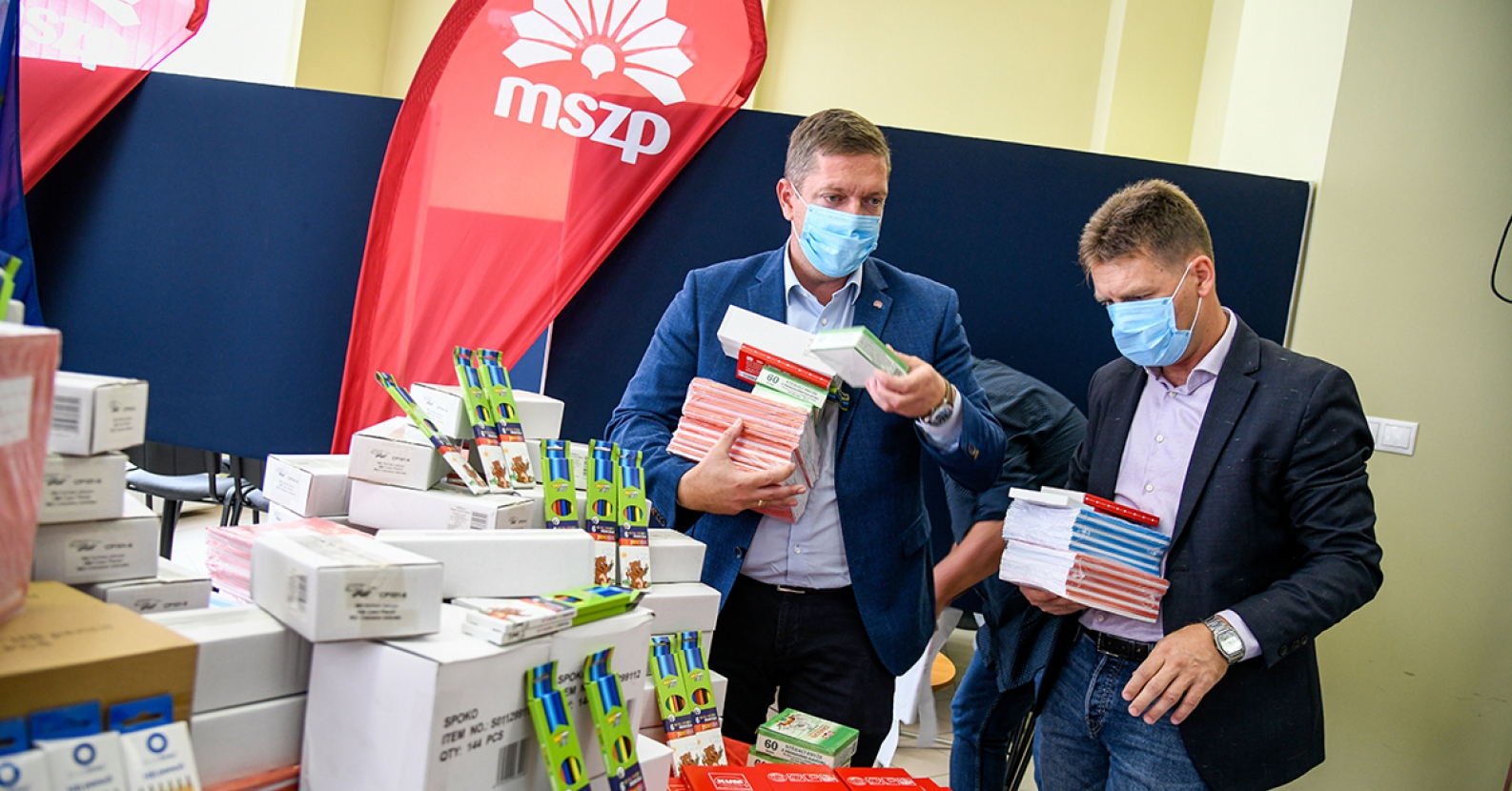 MSZP launches another charity campaign: its Members of Parliament now spend HUF 10 million altogether from their salaries to support the children of families in need starting the school year as well as their epidemic protection, and will be distributing school supplies in Szeged-Csanád county for three days starting today - announced party president Bertalan Tóth, MP Sándor Sazbó and chairman of the party's organization in Szeged, József Kozma at a press conference in Szeged on Tuesday.

Sándor Szabó said that on the initiative of Szeged, the parliamentarians of the Hungarian Socialist Party and Dialogue and the local representatives of Alliance for Szeged will jointly distribute school supplies from Tuesday to Thursday near schools in Szeged, in the South of Hungary and in several settlements of the county, primarily for families in need.

He said his party had presented several initiatives to the government, including proposing the payment of a 13th month family allowance, but all that the government has actually done was to bring forward the September amount to August, which will later be missing from the families’ budget.

The enrolment of a child can range from 35 to 80 thousand forints. The situation is exacerbated by the fact that according to the latest news there are already 200,000 families without jobs and income due to the epidemic, despite the Prime Minister's promise that everyone will have a job in three months, he explained.

President Bertalan Tóth announced another charitable, solidarity campaign by the MSZP: the party's MPs will now spend HUF 10 million of their salaries to help families in need in the coming weeks to alleviate the costs of school staring and to control the epidemic, as, as he said, not everyone can afford the required safety gear.

“Solidarity with us is not just a slogan, not just a buzzword, but a practice,” he noted.

The allocation of the, as Tóth put it, ‘modest amount’ of HUF 10 million is a new element in the series of solidarity and charitable campaigns the MSZP has previously launched. In the course of these, HUF 20 million has been spent so far from the party's Solidarity Fund, the contributions of Socialist representatives, for charitable campaign actions: safety gear and durable food.

As before, the campaign will be coordinated by the county organizations of MSZP, and the donations will be distributed to those in need through the county presidents.

He reiterated MSZP’s demand that the government double the family allowance and help families at least now, when the children start the school year, with an extra monthly allowance.

Hundreds of thousands were left without income during the epidemic period, but the government does not help: it did not extend unemployment benefits, did not increase them either, the amount of the family allowance has been the same for 10 years now, and Hungarian families pay the same for electricity, gas and district heating despite falling world energy prices, from which the government finances its own background people, its oligarchs, he said.

He also thanked the exemplary behaviour of the Szeged socialists and the Municipality of Szeged for its social measures.

József Kozma, a socialist local government representative from Szeged, said: Szeged, which has a “fair, solidarity-based local government”, had previously allocated HUF 100 million for the enrolment of local children, i.e. HUF 10,000 per child.

This item, along with other social spending, was also retained when they had to amend the city’s budget in July due to a billion-forint tightening of municipal resources.

This support was originally open until the end of August, but the municipality extended the deadline until September 15, he announced.